Why do we judge others on their jobs?

As you know I have been looking for a new job for a little while, when I say looking I use the term loosely. This is not because I am lazy, I am 37 and have worked for 22 years already, in some jobs from 70-90 hours a week. So I am definitely not lazy and I have never had any time off, other than for maybe a few days of sickness and of course holidays in that time. I am not sure why I feel the need to justify this, but I kind of do.


I have changed jobs and countries along the way, but always worked. I have had all sorts of jobs, some good, some crap and some where I could understand how people murdered their bosses, colleagues and definitely customers. In fact in some ways I think the amount of years I have worked in hospitality, customer service roles and the like are what have made my tolerance for people a lot lower than it ever was. Also these jobs have made me realise I love working with people, so it is a hard one. This all combined means I have really enjoyed taking some time for me, for a change. If I ever know I am leaving a job, it is to go to another. Or if my contract is not renewed I know 1 month in advance, so always am able to line up a new job. In all honesty this is probably why I have had jobs I have hated, the fear of having no job and money. This time I have decided I needed to think what it is I like, what I want and what is important in a job.


I know that colleagues have to be good, you spend more time together with them than your other half/family. I want to do something that could make a difference to others. I want to get up on a morning and actually leave the house. Most importantly of all, I want to enjoy it and be happy.


This all sounds so easy and clear cut, however I am stuck now looking at the pros and cons so much, maybe due to the fact I would like something more long term. In The Netherlands you see you are allowed 2 temporary contracts before you are then offered a permanent contract, this hardly ever happens, as you have more rights after this and it is harder for you to be fired. I have actually been told that companies use agencies so that they can have five and a half years to fire their staff, using this method! Which I think is ridiculous.


Then I saw a vacancy in a supermarket deli kitchen and thought, it is part-time, it is close by and I will see actual people, why not give it a go. I was successful in my interview, not that they could quite understand why a 37 year old “professional” (their words) with no children wanted to go “backwards” (also their words) and take a somewhat less professional job. I told them one of the reasons was that I wanted to work part-time, I was fed up of living to work and that the loss of my friend had made me reassess my life. This seemed to make more sense to them. The only thing that puts me off this job is working on a weekend.


The reaction I have had from some other people, including some friends is to look down their noses at me, look at me like I have finally lost my mind and a few who have said I will hate it. So this made me wonder why people see some jobs as beneath them. Without people to stock shelves, empty bins, clean streets we would all be in the shit, possibly literally. These people are in some ways in more important roles than those who look down upon them, so what if they don’t sit in a nice cosy office? For some people it is their worst nightmare. Can you imagine if no one ever came to collect your rubbish? Like what would you do? The rats would have a field day, as would the bacteria. Why do people think being shouted at down a phone, by customers who forget you are a human because you are faceless is better than standing in a shop? Is the fact that you work in an office so much better?


I just think that people should stop judging others for their job/career choices. Some of the people looking down on others have had a relatively easy life, they do not know what it is like to HAVE to work in a job they hate, to keep a roof over their heads, to put food in the mouths of loved ones. If we were all the same, the world would be boring, but we don’t need to be unkind and judgemental.


I have also, typically been offered another well paid job, with more travel and a 9-5 schedule. I might take this job later on instead, if I am successful. I will not however, take this job because I think it makes me a better person, or look better to others, I will take it if the pros outweigh those of the other job. If I decide to stand in a deli instead then I will do this to my best ability and because I want to, which feels like a nice decision to be allowed to make, also a luxurious one. Let’s all just be kinder to others and not look down on others.


Have a great weekend all. 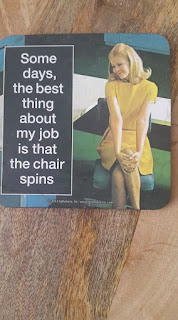