We will not forget 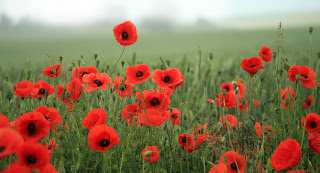 
How can we not remember?


Those that died, for us,


I try and imagine what it was like, to wave off your loved ones and never see them again,


To live lives in such fear and pain,


That boy from your class at school, he was seen as tough,


Children who were living in constant fear, would their dads return?


Watching the landscape around them, bombed and burn ,


Their dads hoping their children were safe, trying to put an end to the war,


Seeing things they had never seen before,


The news that the ones you loved were dead,


The ones who made it and returned wounded, disabled and changed inside,


They had to live with the memories and flashbacks in their minds,


From all of the evil and hatred they had seen,


They were never to be the same people they had once been,


Trying to sleep, closing their eyes,


Every time they did they heard the screams and cries,


In the fields, the poppies would grow,


Alongside the graves, row upon row,


To mark the sacrifice that was made,


The ones who for them, the ultimate price was paid,


No, they shall not grow old!


But we have to make sure their stories are remembered and told,


To show everyone our gratitude and pride,


So they know it wasn’t in vain, the reason they died,


Even those in unmarked graves, names unknown,  are never forgotten,


A life that touches others goes on forever, as does our gratitude